No, no. We don’t talk politics,” Tommy Hilfiger says, shaking his head at me. Hilfiger is no rookie – he learns from his mistakes. In 2016, shortly after the election of Donald Trump, designers lined up to denounce the idea of dressing the First Lady, but Hilfiger offered himself up, saying “any designer should be proud to dress her”. The backlash was immediate and brutal, with calls on social media to boycott the brand. When I ask him about it, the designer cracks an uncomfortable smile, his eyes darting to his press manager who has been looming over my shoulder reading my questions and I am advised – strongly – to move on.

Hilfiger, an upstate New York native with no formal design training, opened his first fashion business, The People’s Place, at the age of 18. At 25 he filed for bankruptcy. Undeterred, he moved to New York City and, with the help of a generous backer, launched his eponymous brand of preppy apparel, inspired by the American sportswear giants, Ralph Lauren, Perry Ellis and Calvin Klein. In 1992, his became the first fashion business to float on the New York Stock Exchange.

I meet the designer at his European flagship store on London’s Brompton Road the day before his London Fashion Week show. Having shown recently in Paris, New York, LA, Shanghai and Milan, this season he’s at the Tate Modern in honour of his recent collaborator, Formula One driver Lewis Hamilton. “It is going to be hip-hop, street, rock, nautical, preppy, classic, Americana and fun.”

Hilfiger is warm and friendly, and projects a cucumber-cool exterior that is at odds with his tightly run ship. After 35 years in the industry, Hilfiger is well-versed in interviews and knows what to expect (I am the first of 11 journalists meeting him today), offering up politician’s responses to questions he’d rather avoid and assuring me, “I can always tell when the questions have been mapped out by a senior editor.” He’s a generous interviewee, mirroring my questions for the camera’s benefit and offering neatly editable soundbites. A harem of heavily branded staff fuss around him. One even whips out a jade roller and begins drawing it swiftly across his cheekbones. “I’ve never been coddled like this in my life,” he says. Somehow, I doubt it.

It’s the relaxed, no-sweat vibe that defines the Hilfiger brand – and the man himself is nothing if not impeccably on-brand. Today he’s flown in from Manhattan and is sporting the preppy aesthetic with which he is synonymous: a navy sports suit atop a zip-up sweatshirt, zip undone to reveal a white shirt with open collar. On his feet: box-fresh trainers, no socks. Everything is very “Tommy Hilfiger”. Despite the jetlag (“you never get used to it – and I move around a lot”) he’s peppy and upbeat.

The autumn/winter 2020 collection is the designer’s fourth with Hamilton. The pair bumped into one another at the Met Gala (where else?) and the result was a collection of luxury streetwear. This season, Hilfiger has also brought in Grammy award-winning R&B artist H.E.R alongside Hamilton for what he’s calling the brand’s “first three-way collaboration”.

This approach is his MO. Hilfiger was one of the first designers to harness the selling potential of celebrity, courting hip-hop stars in the early Nineties to enormous commercial success. Snoop Dogg wearing an oversized Tommy Hilfiger sweatshirt to perform on Saturday Night Live in 1994 sent sales skyrocketing. Despite the fashion elite initially turning their noses up (“they looked down on us for making oversized clothes for rappers, saying well you’re not really a fashion designer, fashion designers are couture designers in Paris”), it meant that Hilfiger was miles ahead of the era of influencer marketing. Since then, he’s invited the hottest stars and models of the moment – the likes of Kate Moss, Gigi Hadid and Zendaya – to put their lucrative stamp on his collections.

The 68-year-old has adopted the vernacular of his young collaborators. Everything is “epic”, and he assures me he is “woke” (“I really believe that there are some businesses and some companies that are awake and some that are not. We are very woke”). It feels a little forced, like a dad trying to be down with the kids; but it’s this ability to remain plugged into the zeitgeist that has seen the Tommy Hilfiger brand continue to flourish in the face of increasingly fierce competition. Today, the company has 1,800 stores in over 100 countries worldwide. Its parent company PVH reported higher-than-expected 2019 earnings, which it credited with high demand for Tommy Hilfiger products (revenue for Tommy Hilfiger was up by 10 per cent to $1.2bn for the third quarter of 2019 year on year). Comparably, PVH’s other sportswear brand, Calvin Klein, saw a year-on-year revenue increase of just 1 per cent during the same quarter.

There’s a subtle whiff of smug around what he’s achieved. “We were really the first to do streetwear,” Hilfiger says. “What we didn’t realise was that Louis Vuitton, Gucci and others would be doing it 25 years later, so we’re quite proud of that.” But he’s too canny to turn his nose up at the competition; instead embracing it unequivocally. In 2017, Tommy Hilfiger collaborated with Parisian streetwear design collective Vetements on a collection that sold out within minutes, and in 2019 with cult label Kith on “sneakers that sold out in less than an hour”. Through careful observation of the skyrocketing success of brands like Supreme, Hilfiger knows how to drum up hype, offering these collaborations in limited edition drops.

Part of this success is an ability to adapt to the mercurial fashion landscape. Most recently, environmental concerns have been at the forefront of the fashion agenda as a result of increasing pressure from groups like Extinction Rebellion to challenge the structure of the industry amid the escalating climate crisis – and Hilfiger has been sure to jump aboard. The press release accompanying the TommyXLewisXH.E.R. capsule collection claims that “over 75 per cent of the collection features sustainable elements”.

But in a greenwashed fashion industry, what does that actually mean? “All of the denim is sustainable, recycled, upcycled, we’re washing with lasers instead of water, we’ve been doing it for over five years,” he tells me. Denim is notoriously one of the most environmentally destructive fabrics. The typical dying process used in denim manufacturing sees a repetitive drip-dry method that requires thousands of litres of water for just one pair of jeans and can result in the release of toxic chemicals that seep into the oceans, so moving to laser washing is a positive step. Competitor brands including Gap and Wrangler have also changed their dying process in efforts to conserve water. “We’re also looking at different ways of everything from packaging to using recycled yarns to using vintage and upcycling a lot of what would normally go to landfill. So, it’s a big project but we would like to be leaders in it and we’re taking it very seriously,” Hilfiger adds (apparently not seriously enough to slow down production or limit trips across the pond, I think to myself).

The timeless appeal of the Hilfiger aesthetic has been wholeheartedly embraced by a nostalgic millennial generation, who have been purchasing vintage Tommy on shopping apps like Depop. This longevity also helps in the backlash against disposable fashion.

Despite apparent efforts to increase the eco-consciousness of the brand, Hilfiger won’t go as far as to support calls by Extinction Rebellion to terminate London Fashion Week. This week, the group appealed to the British Fashion Council to cancel the year’s other Fashion Week in September and “immediately start work on an emergency action plan that aids stakeholders through change”.

“There will always be protests for everything,” Hilfiger says, “and there’s no reason it should end.”

“I think that we have to as an industry do the right thing for society. And I really believe that upcycling and recycling, making fabrics out of plastics and cleaning the oceans is our duty to the world and to ourselves. Sustainability is something that every brand has to embrace. Because in two to three years if a brand is not sustainable, it will be out of business.”

This season’s collection follows on from the brand’s offerings since September 2016, when it launched its see-now-buy-now business model that enables customers to buy items “globally across an ecosystem of immediately shoppable channels” the moment the runway show has finished. The see-now-buy-now model has led to “a direct increase in sales” for Hilfiger. Many brands have dipped a toe in the water: Tom Ford adopted the model in 2017 and quickly abandoned it after one season; Burberry adopted it and now applies it to just a handful of products – but the majority of big brands appear to be standing firm with the six month-long wait from catwalk to shop floor.

Hilfiger adds: “It is very complicated to do, because you have to change your entire way of doing business, your entire design calendar, supply chain, but we’ve had great success with it.

“People want immediate gratification. They see it on the runway, they want to buy it and wear it the next day. They don’t want to wait six months. By the time six months goes by, they may be tired of it, they may have moved onto something else. So, my philosophy has been to always listen to the consumer.” It’s a philosophy somewhat at odds with an apparent drive for sustainability – but then again, so is the fashion industry.

The collection runs the Hilfiger gamut; a clash of hip-hop streetstyle codes (glow in the dark tracksuits, hoodies and activewear covered in graffiti and paint splashes); injections of racing-driver jumpsuits; an offering of retro prep through gold-buttoned cardigans and nautical colours and of course, the ubiquitous Star Spangled Banner. It’s a collection that hopes to have something for everyone.

Whether or not that’s the case, only the sales figures will say; but whether you’re a die-hard Hilfiger fan or a sceptic, it’s impossible to see the show and not get sucked into the hype. For the finale, all models – and Lewis Hamilton – storm the runway with a waving, beaming Hilfiger at the helm, looking every bit like the cat that got the cream.

Versace praised for banning use of kangaroo skin

Fri Mar 27 , 2020
Versace has been praised by animal rights campaigners for banning use of kangaroo skin in its collections. As devastating wildfires continue to ravage Australia, increased attention has been placed on the scores of animals harmed and killed across the country, including kangaroos. Following the news that an estimated one billion […] 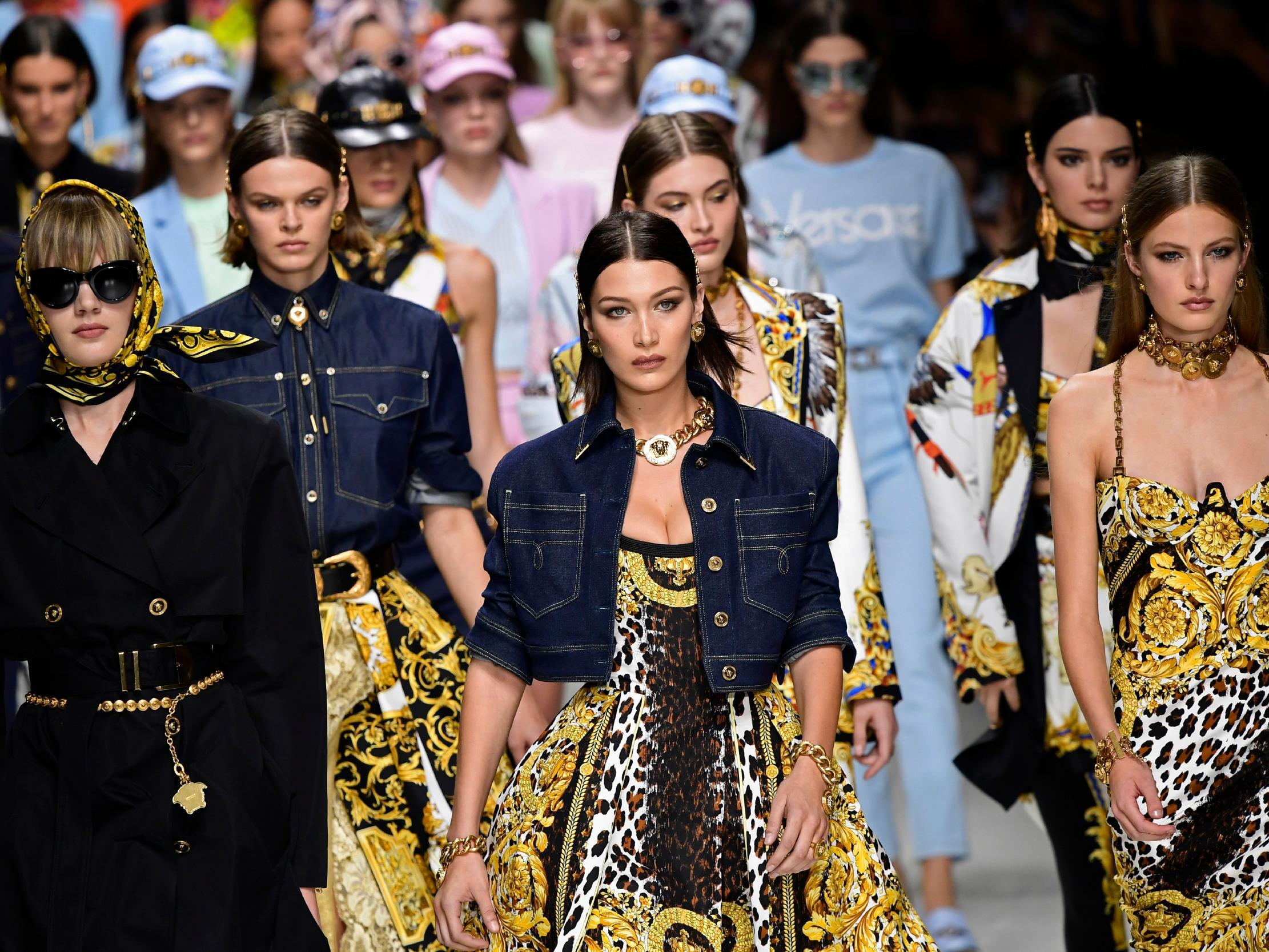