On Tuesday 19 May, the Duke and Duchess of Sussex celebrate their second wedding anniversary.

Much has happened since the couple tied the knot at St George’s Chapel in Windsor in 2018, the most significant moments being the birth of their son Archie and their decision to step down as working members of the royal family.

On the day of their nuptials, Meghan paid homage to British fashion by wearing a gown designed by former Givenchy artistic director Clare Waight Keller for the ceremony.

She also wore an intricate veil, which honoured her new responsibilities within the Commonwealth.

But what about the style touches that weren’t so obvious? From her “something blue” hidden in her veil to a sentimental piece of jewellery worn for the reception, here are the secret symbols displayed by the duchess as part of her wedding ensemble:

The bride’s “something blue”

Several months after the royal wedding, Meghan revealed that her “something blue”, a traditional element of a bride’s wedding outfit, paid tribute to the beginning of her and Prince Harry‘s relationship.

While speaking in a preview for the documentary Queen of the World, the former Suits actor stated that a blue piece of fabric taken from the dress she wore on her first date with her husband was sewn into her veil.

“Somewhere in here there’s a piece of blue fabric that’s stitched inside – it was my something blue,” she said, while gazing at her veil and gown.

“It’s fabric from the dress that I wore on our first date,” a detail described by Royal Collection conservator Hannah Belcher as “about the most romantic thing I’ve ever heard”.

The Duchess of Sussex made a grand entrance when she arrived for her wedding ceremony on 19 May 2018, her five-metre, silk tulle veil draped elegantly down the steps leading up to St George’s Chapel.

Designed by Givenchy’s Waight Keller, the veil was made with a trim of hand-embroidered flowers, a detail that took hundreds of hours for dressmakers to complete.

The veil featured a unique flora from every country in the Commonwealth, in addition to two of the bride’s personal favourite flowers.

The additional flowers included a wintersweet, which grows in front of Nottingham Cottage in the grounds of Kensington Palace where the Duke and Duchess of Sussex used to live, and the California poppy, the state flower of Meghan’s place of birth.

In an interview with French magazine Paris Match, Waight Keller revealed that the embroiderers who worked on the veil washed their hands every 30 minutes to avoid tarnishing the delicate material.

As monarch, Queen Elizabeth II has an expansive collection of tiaras at her disposal.

Therefore, her decision to lend this specific headwear for Meghan on her wedding day is particularly significant.

The tiara was given to the Queen in 1953, the year of her coronation, by her grandmother Queen Mary.

Therefore, the Queen’s decision to give it to the Duchess of Sussex for her wedding could be interpreted as a symbol of their close relationship.

The diamond bandeau of the tiara was made in 1932, while the brooch at its centre was created in 1893.

As Meghan and Prince Harry said their “I do”s in St George’s Chapel, the camera zoomed in on the couple exchanging rings.

The wedding band placed on the bride’s finger by the groom was made of Welsh gold.

It has been tradition for members of the royal family to wear wedding rings made of Welsh gold for almost a century, Reuters reported.

Queen Elizabeth the Queen Mother was the first member of the royal family to wear Welsh gold when she married the future King George VI in 1923.

Prince William chose not to have a Welsh gold wedding band made because he doesn’t like wearing jewellery, a Palace aide told Time magazine following his wedding.

Meanwhile, Prince Harry opted for a platinum wedding band with a textured finish.

Following their wedding ceremony at St George’s Chapel, the newly-titled Duke and Duchess of Sussex had a quick outfit change before heading to Frogmore House for their wedding reception.

As the bride and groom took their seats in a silver blue classic convertible Jaguar, with Prince Harry behind the wheel, Meghan was seen sporting a large aquamarine ring, in addition to a halter-neck Stella McCartney gown.

Eagle-eyed fans were quick to spot that the emerald cult ring famously belonged to the late Diana, Princess of Wales, who died in 1997 when Prince Harry was 12 years old.

Princess Diana was photographed wearing the ring on 2 June 1997, while attending a private viewing of her own dresses for a Christie’s auction in London.

Meghan wore the ring again in October 2018, pairing it with a white gown during a reception in Tonga.

Floaty summer dresses that are perfect for life in lockdown

Sat May 23 , 2020
After weeks of wearing casual, “stay at home” attire it can be easy to find yourself stuck in a sartorial rut that consists of nothing but baggy tracksuit bottoms, stretchy leggings and, when you’re feeling really fancy, a matching loungewear set. But, as the weather warms up and Boris Johnson […] 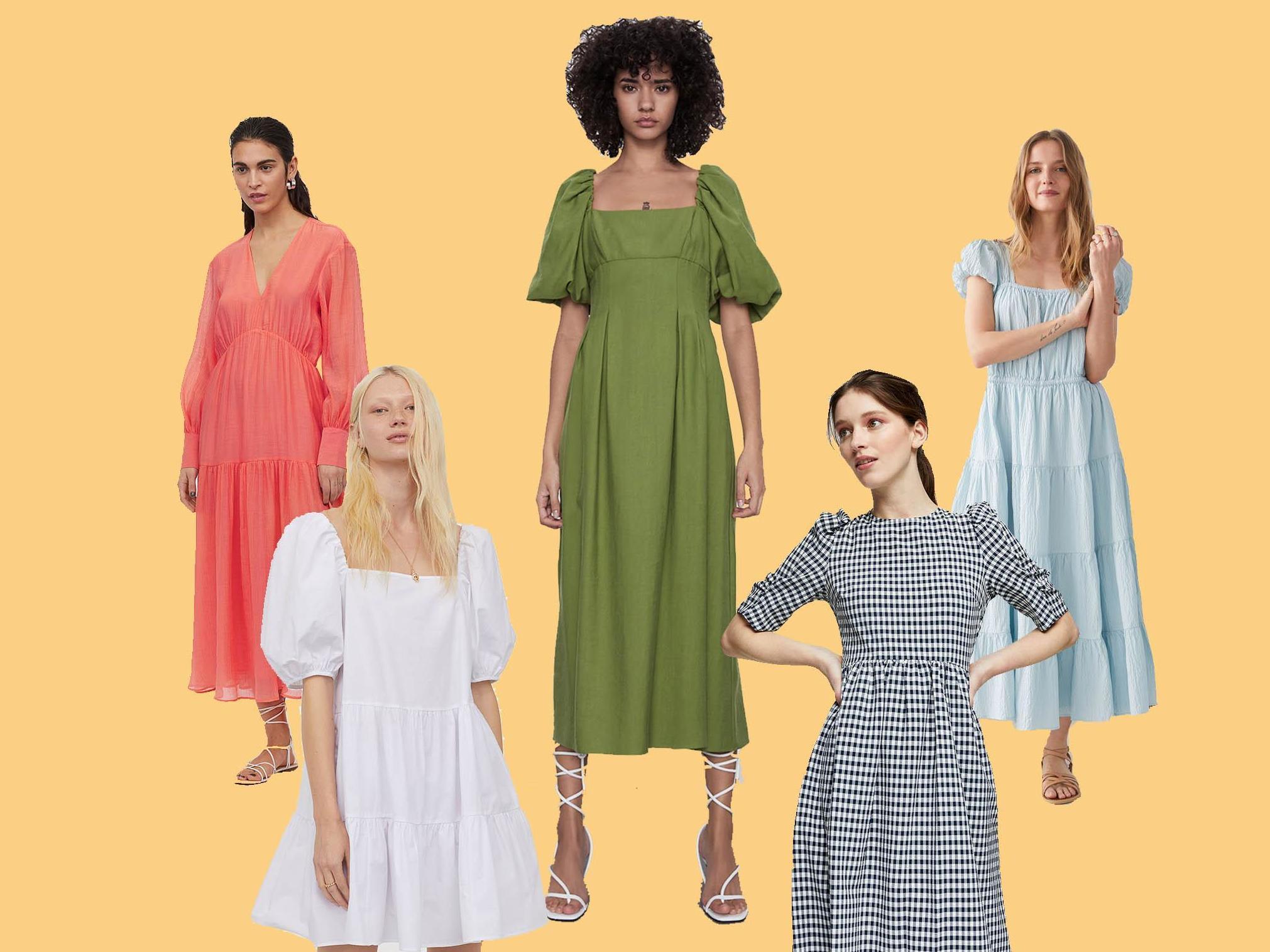