Extinction Rebellion has made their opposition to London Fashion Week abundantly clear, staging a protest calling for the event to be cancelled.

The environmental movement blocked roads outside a venue for the biannual fashion event on Saturday.

Participants of the demonstration refused to let traffic pass by at a busy intersection leading to the Strand in Westminster, central London.

Drivers on the road became increasingly frustrated as they were prevented from driving by, prompting one taxi driver to shout “f***ing move” as they were forced to remain stationary for a quarter of an hour.

Prior to the protest, a Facebook event was set up informing people who wanted to join of the demonstration’s whereabouts.

The event blurb stated: “Join us on the streets at London Fashion Week to demand that this season’s must-have is the continuation of life on Earth.”

The description of the demonstration outlined that the day would begin “with a swarm, followed by creative actions, music, block printing, speeches and family activities”.

“Let’s use the power of creativity to vision a better world,” it stated.

The group explained that the clothing industry “accounts for 7 per cent of global greenhouse gas emissions, almost the same as the total emissions of the EU”.

The movement added that they wish to “challenge the industry to stop the cycle of overproduction and overconsumption that threatens those that least contributed to it”, saying that it is urging the fashion industry to use its “power of persuasion to tackle the climate and ecological crisis in a meaningful and just way”.

During the demonstration, protesters carried placards that read “No more false fashion” and “No fashion on a dead planet”, with some wearing dresses made of chains.

Sara Arnold, who helped to organise the event, said that while London is “home to the cutting edge of sustainable and ethical design”, London Fashion Week “lags behind”.

“And, despite having an active political engagement programme, you have done almost nothing to lobby for environmental policies, without which a transition with the urgency we need is simply impossible,” Ms Arnold said.

“We have all failed but now radical leadership is required. We need you, the British Fashion Council, as appointed industry administrators, to find the power and courage to centre a visionary process and protocol, without delay.”

Ms Arnold stated that if the BFC does not cancel the next London Fashion Week in September, Extinction Rebellion will “build pressure” and “escalate” its actions.

Angela Duncan, a spokesperson for animal welfare campaign group Animal Rebellion, spoke to campaigners at the demonstration, saying that retailers have a “responsibility” to protect the environment.

“We should be excited about being creative and innovative with our clothes, not just in style but in the production of the clothing,” Ms Duncan stated.

“This is the place to lead by example and change the way we understand fashion. Isn’t that in itself a dream for artists?”

Earlier this week, Extinction Rebellion wrote a letter to the British Fashion Cancel asking the organisation to lobby for legislation to cease the fashion industry’s “exploitation of planet, people and animals”.

The letter was signed by other leading climate change campaigners, including Livia Firth of Eco-Age, Safia Minney MBE and Simone Cipriani of Ethical Fashion Initiative.

In addition to the demonstration at London Fashion Week, Extinction Rebellion is also holding a pollution protest today at Gatwick airport.

A group of activists arrived in the airport to greet travellers, unveiling banners, shirts and badges.

The demonstrators handed out leaflets to travellers that apologised for the disruption, but also stated: “We need your help.”

The demonstration is being overseen by airport security staff, who have spoken with the activists.

Wed Mar 18 , 2020
Girls creator Lena Dunham fulfilled a childhood dream when she made her catwalk debut at London Fashion Week. On Friday 14 February, Dunham starred in the runway show for London-based luxury womenswear label 16Arlington. The actor showcased an A-line dress with a gold floral skirt and black asymmetrical top as […] 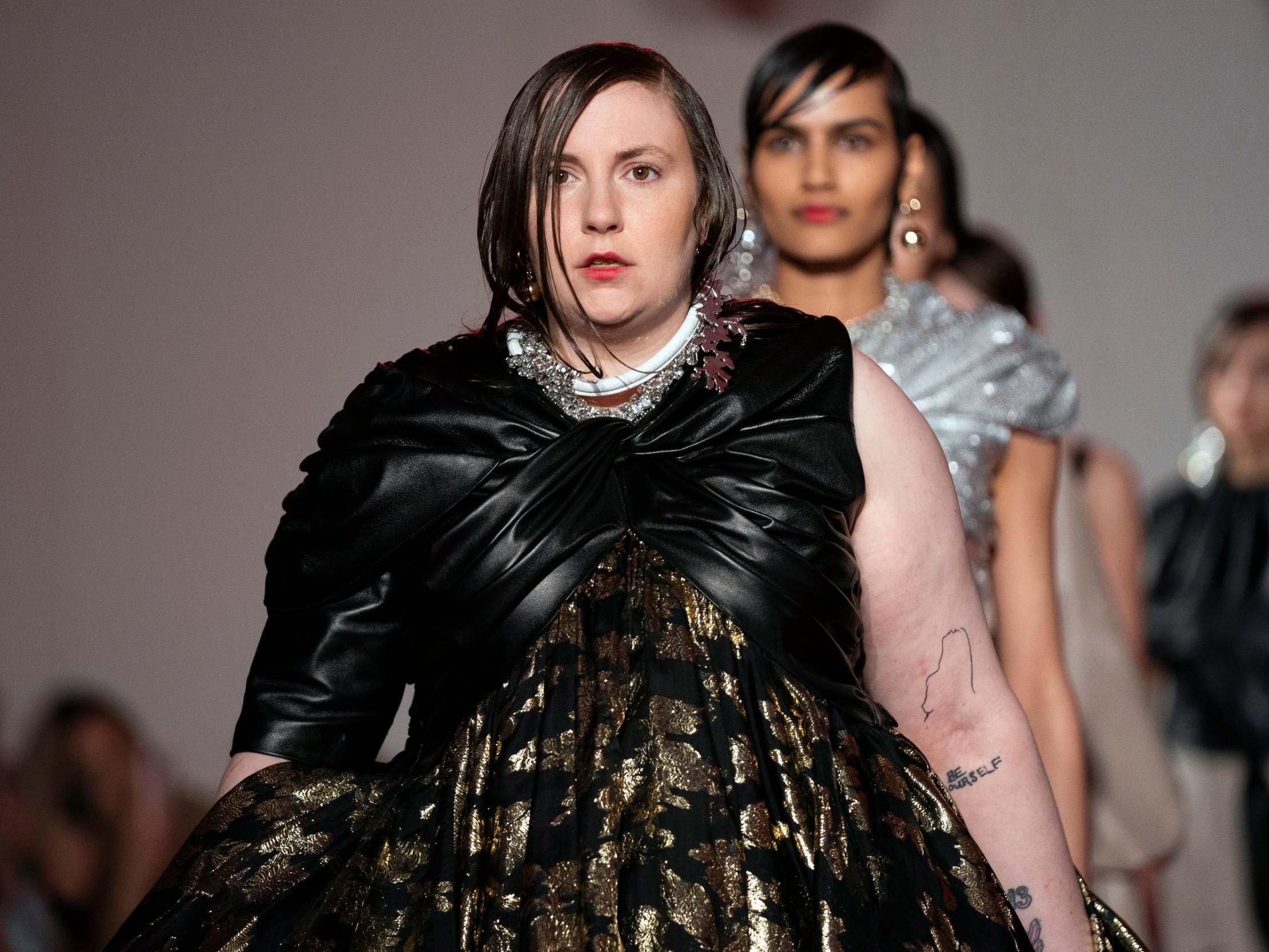