Ethical fashion campaigner Livia Firth says the coronavirus has sounded the alarm in the fashion industry that sweeping change is needed on its consequential environmental impacts.

“The fashion industry has been talking for years about the need to change,” she told The Independent. “There have been conferences, panels, people talk and talk, and nothing happens. Now, with the pandemic, it’s not should it change, it has to change.

“Until now climate change and sustainability, poverty and migration have each been put in a box. The pandemic has shown us that everything is connected. It’s one massive problem.

“We can finally see it through a different lens and we are in a privileged moment to act. The pandemic has highlighted that sustainability is the only way forward.”

She has been beating this drum long before it became fashionable. In 2007 she founded Eco-Age, a consultancy that works with brands to improve their green credentials, with her brother Nicola Giuggioli.

Ms Firth, who grew up in Rome, spoke on a Zoom call from her home in Italy, where she has been hunkering down for several months. The country has been one of the hardest-hit by the coronavirus and watching the outbreak unfold convinced her to shutter the company’s Milan and London offices in quick succession.

“We were concerned that everyone was coming to work on public transport because it wasn’t safe. Now we’re all working remotely and spending millions of hours on Zoom,” she said.

Ms Firth decamped for Italy after the UK government gave her little faith that they had acknowledged the gravity of the crisis. “We thought we’d rather be in a country that takes it really seriously,” she said.

In recent years, Ms Firth has emerged as a champion of sustainable fashion and a vocal critic of the apparel industry’s failure to protect vulnerable workers in developing countries and its impacts on climate and biodiversity.

On a 2008 trip to Bangladesh as an Oxfam ambassador, she witnessed garment factory workers, mostly women and girls, working in dangerous, abusive conditions for derisory wages to make clothes destined for the high street. (She subsequently returned following the catastrophic Rana Plaza factory collapse in Dhaka which killed more than 1,100 people and injured 2,500, the deadliest garment industry accident in history.)

“I had never realised there was such a strong link between fashion and human rights,” she said.

Today, brands trip over themselves to extol their principled stances but it wasn’t always so fashionable to be vocal about the inextricable issues of social and environmental justice.

An opportunity presented itself after her husband, the actor Colin Firth, starred in the movie, A Single Man, in 2009. He was a hot favourite that awards season and a packed schedule of red-carpet events were lined up.

For Ms Firth, it was a Damascene moment. “Everyone pays attention to the red carpet,” she said. “I thought, if you want fashion to talk about human rights, I can give you fashion.”

Before every phalanx of cameras, she appeared in an outfit from a eco-conscious designer, dubbing it the “Green Carpet Challenge”.

At the Golden Globes, she wore a reconfigured Christiana Couture wedding dress and for the Oscars, her look was literally rubbish: A black gown by Orsola de Castro, designed from scraps designated to the trash heap by luxury brands.

“Every time I stepped out in yet another strange dress, made of milk fibre or rubbish, Tom Ford [the designer and director of A Single Man] would look at me and shake his head,” she said. “But he was instrumental in how I was able to do it.”

Quirkiness aside (she’s worn a dress of recycled plastic bottles), the experience proved a valuable lesson in what could be achieved by harnessing that vacuous red-carpet query, “Who are you wearing?”

“[The red carpet] is the biggest communication platform that exists. People are obsessed. So not to use it would be foolish,” she said.

Glance through the glut of press cuts from her red carpet appearances and you find name-drops of ethical designers and descriptions of sustainable practices. Ms Firth subsequently leveraged the “Green Carpet Challenge” into a Vogue column (she was made Vogue Arabia’s sustainability editor-at-large in January) and convinced designers to let her auction off the outfits for Oxfam.

For the past three years, she has produced the Green Carpet Fashion Awards. In 2019, the event was held at the Teatro alla Scala in Milan and attended by Anna Wintour, Sophia Loren, Valentino, Stella McCartney along with legions of models and actors.

She said: “I came from years of being frustrated about campaigning for human rights and people not listening. Then I wore a dress and people listen. I found the vehicle. Fashion is a huge, powerful tool to talk about issues.”

She added: “I never cared about fashion, never even read a fashion magazine until I started this.

“When I went to Bangladesh and talked to those women for the first time, I realised it was a feminist issue. Then you look at the devastating impact on the environment and the loss of biodiversity and it’s still through fashion. Then cotton crops, child slavery and bonded labour. Every issue is related to fashion.”

She freely acknowledges that being married to an A-list star like Colin Firth gave her a huge platform to exploit.

“I couldn’t have done it without Colin’s support. It wouldn’t have happened without him taking me around the world,” she said. (The couple separated last year).

Ms Firth is frank that she only overcame a lack of industry knowledge with help from a powerful coterie of female supporters.

“I met Franca Sozzani (the late editor of Italian Vogue) and she said, “I’ll take you to Paris couture and give you a bit of an education.” Anna Wintour opened so many doors for me. Meryl Streep, Julianne Moore and Cate Blanchett all went the extra mile.”

Fashion is at a moment of reckoning. The industry is responsible for nearly 20 percent of global waste water and about ten percent of the world’s carbon emissions, the UN reported. There’s well-documented examples of brands sending “dead stock” up in smoke.

It is also a key driver of loss of biodiversity, the theme of World Environment Day 2020. The clearing of trees for farmland, to provide space for the plants and animals that produce clothing fibers, is contributing to alarming rates of deforestation.

Monocrops and overgrazing of animals leads to soil erosion, depleting it of nutrients and the varied vegetation that supports thriving ecosystems. Intensive use of pesticides and antimicrobials used to preserve plant and animal stocks poison water supplies.

Cotton, which is used to some extent in three-quarters of clothing produced, accounts for 2.4% of farmland but uses 16% of global insecticides, one study found. A 2016 International Union for Conservation of Nature (IUCN) report urged the apparel sector to confront its impacts on biodiversity loss.

The crisis of the fashion industry has become devastatingly apparent in the wake of the coronavirus pandemic.

Zoonotic diseases, those which jump the species barrier from animals to humans such as Covid-19, are emerging at faster rates as humanity pushes deeper into diverse ecosystems for resources, bringing us into closer contact with wildlife than ever before.

At this inflection point, Ms Firth believes that fashion brands are finally waking up to the urgency to adapt.

“Some [brands] have been slower than others,” she said, pointing to the Kering Group (home of Gucci, Saint Laurent and Alexander McQueen) as a positive example of luxury brands doing “massive work” to overhaul supply chain.

“Even some that have never done it until recently, like Diesel for example, are incredibly committed.”

“It doesn’t matter who has been the first or the last,” she added. “As long as more and more brands realise that they have to. If you want to be sustainable as a business and still be profitable in 10 years, you have taken care of your supply chain, the people and the raw materials.”

In 2019, 56 signatories, representing 250 brands, joined the Fashion Pact, a coalition of brands and supply chain partners, to tackle global warming, restoring biodiversity and protecting the oceans. They are due to report on their progress this September.

They face a vertiginous climb: A 2019 update from the Pulse of the Fashion Industry found that although improvements have been made, the effort has slowed since 2018 and “the fashion industry is still far from sustainable”.

Firth has tackled some of the issues in her documentary series, Fashionscapes, laying bare ugly truths but also some unexpected good in supply chains.

In December, she visited Botswana’s diamond mines. A partnership between the country’s government and supplier De Beers provides around 20% of GDP and has transformed Botswana into Africa’s fourth wealthiest nation. The company has also invested in conservation areas. Making the film, she said, drove home the role that brands have to play in protecting biodiversity.

But diamonds are not forever: The film also explored Botswana’s future without its mines, estimated to run out in 20-30 years time.

“I’ve travelled to a lot of supply chain countries – Bangladesh, Vietnam, Cambodia, Zambia and Kenya. The Amazon for the leather supply chain and Australia for wool,” she said.

“In some countries, you meet desperate people enslaved in supply chain and see devastating environmental repercussions.”

Her preconceptions of the diamond industry had been “blood diamonds”, she said. “But in Botswana, every person said, “For us, this is not just a hole in the ground, it’s our pride and our country. We own the diamonds.” They’re so proud of what they do.”

Botswana felt like a “blueprint” for change, Ms Firth said. “You have businesses now which are more powerful than governments and it’s up to them to really behave in a responsible way.

“Instead of planting ‘x’ number of trees, maybe we should be safeguarding entire regions.”

She has pulled no punches on the “fast-fashion” industry and its proliferation of the cheap, disposable clothes which flood our wardrobes.

“Fast fashion is a gigantic rotten issue, like fast food, and everything at that scale. It’s very difficult to relate to because people feel so removed from it. It seems like a gift that we can consume so cheaply,” Ms Firth said.

As consumers, it’s on us to change our attitudes to throwaway culture. “I’m 50 and when I grew up, fast fashion didn’t exist. We had a high street but the prices were still quite expensive. We saved money to buy.

“Today, we’re brainwashed to think that it’s democratic to consume at those prices and we consume a lot. Now there is luxury fashion with prices that are beyond reasonable and then fast fashion, which is beyond reasonable too. They are two extremes.

“In the middle, there is a wealth of independent and small designers. I really feel this is the moment that consumers will start to look at them as an alternative.

She added: “We need to retrain ourselves to consume in a different way. Because when we look at the devastating impact, whether that’s on labour in Bangladesh, or on biodiversity and conservation, hopefully it means before we buy our next thing, we’ll really think twice.”

The Independent is calling for an end to the high-risk sale and trafficking of wildlife with our campaign, Stop The Wildlife Trade

From Asos to H&M, these are the summer sales to shop now

Mon Jun 8 , 2020
The coronavirus pandemic has meant all non-essential businesses have been closed since lockdown began on 23 March. It’s had a detrimental impact on fashion shops across the UK. B2B magazine, Drapers reported in-store sales have dropped 84 per cent compared to 2019, and – despite online grocery sales surging – […] 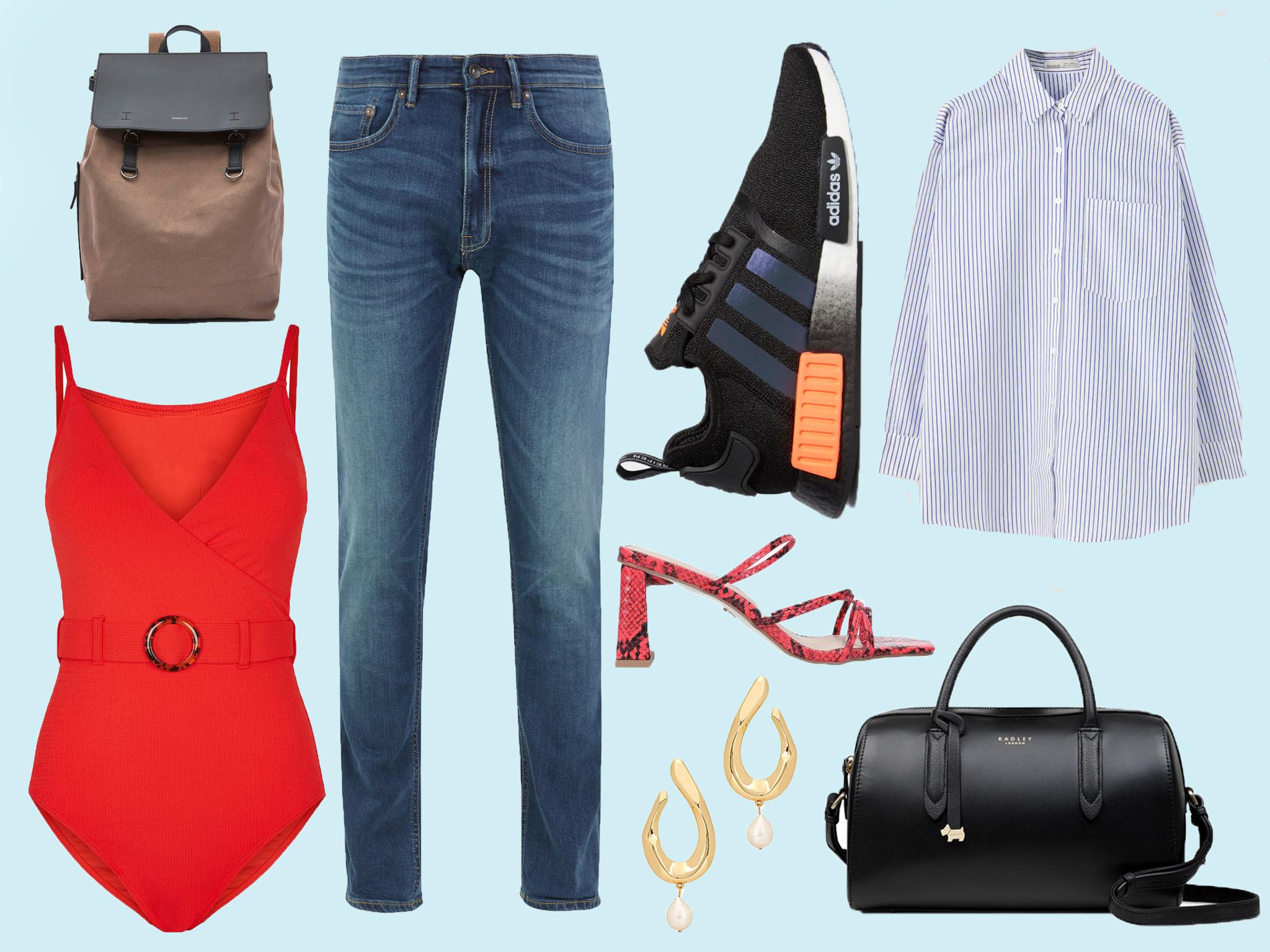